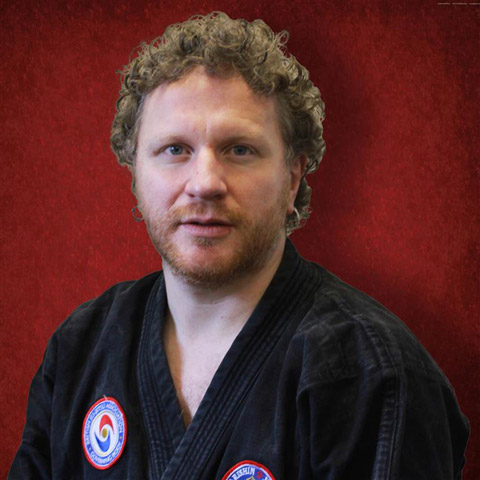 Originally 1985 for a couple of years, then took an 8 year break and started again when I left university in 1995

I had tried judo as a junior, but wanted something that was a bit more varied and included striking. I like the fact that ju-jitsu covers so many fighting styles; grappling, throwing, holding and locking, striking, weapons etc. etc. I also like the fact that, although it encompasses sport elements, ju-jitsu is really a self defence art.

A couple of judo classes. Oh, and played in goal for a couple of local football teams as a junior!

My very first class was when I was still a junior, around 13 years old, at the William de Ferrers centre in South Woodham where I was at school at the time. I remember thinking that everyone seemed a lot older than me, and much more advanced. But the Sensei at that time (Brian Devlin) made me feel very welcome and paired me up with someone to show me the ropes, and I was soon being thrown around (and kind of enjoying it..!), and was very impressed by the techniques I saw being practised. When I started again seriously after university, Sensei Ian Arbon was running the class and I returned as a long haired ex-student. None of the same people were still training, and again I remember watching the other black belts and thinking how much more advanced than me they were (but at the same time thinking "that's what I want to be..."), but also thinking that the class had a good positive vibe to it.

Seriously, after two years training at Sensei Arbon's class and obtaining my Brown Belt. I'd been training with the same person (Luke) for the two years, and we trained quite a lot and quite hard, and suddenly it seemed like a real possibility that we could go for the Black Belt.

Obtaining the Shodan grade was hard work; a year after brown belt Luke left to go to university, and I trained for another year with various different partners for another year, training 4 times a week in the run up to the grading. On the day I turned up not knowing who I'd be grading with! Luckily a third Dan was drafted in to be my uke…

I'm very proud to have become a black belt, but I think what it really means is that I've just started on a very long journey discovering ju-jitsu. Becoming a black belt means you've mastered the basics, and now you can get down to really finding out what it's all about!

I play in a band and often find myself in dodgy pubs full of dodgy characters, but mostly I've found that the confidence knowing ju-jitsu gives you means that you can walk away from confrontation and / or diffuse situations where a fight would otherwise have happened. Having said that it has come in handy on the odd occasion when people have gotten rowdy…

I've competed in quite a few BJJAGB and UNJJ competitions, and have a bronze and silver medal for sparring, and a bronze for random attacks.

Definitely positive. I'm certainly fitter than I would be if I didn't do it (it's the only thing that stops me getting a beer belly…), and I feel more in tune with myself physically and mentally. Although many people think of ju-jitsu as a violent pastime, I find training mentally relaxing and a great stress reliever after the strains of modern living / work.

Learning a martial art like ju-jitsu helps you to understand and tune in to your physical and mental condition. It instils confidence, mental and physical awareness, fitness and poise. I believe that ju-jitsu specifically is the best all round self defence art as it encompasses so many different styles.

I never seem to have enough time for training! I try to train twice a week, and would do more if I could, plus occasional weekend courses, ko-budo etc. In the run up to Dan gradings more training is definitely needed…

Have fun with it, be receptive to new ideas, and don't be put off by how much more advanced senior grades may seem; they were all novices once! And go to training when you feel tired out and not sure of you can be bothered, those sessions usually turn out to be the best ones. Like most things in life, you get out what you put in...