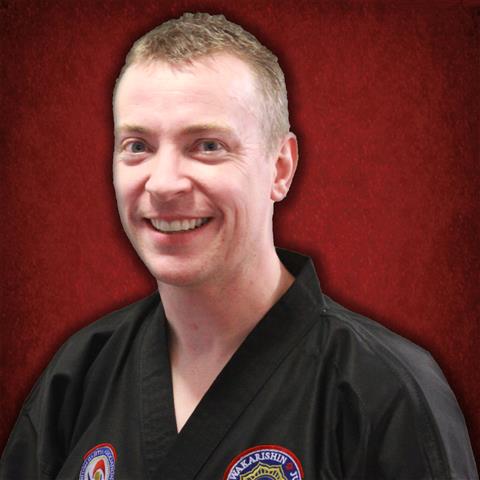 Originally about 1990 for just a few sessions with my older brother and his friend then I started training from white to green belt in 1991. After a very long gap of 9 years I returned again in 2010 and haven't looked back since!!

Originally I was really impressed with the different locks being demonstrated which for me stands out as a difference to other arts. In addition I was also attracted to the various other components that made Ju-Jitsu. It's an all round art and you never stop learning!!

Yes I did a lot of sports as a kid which included district 1500, Cross Country, Long Jump and Javelin. I played football for many years at a very good level and also ran my own football club which became very successful. Martial arts - I tried Karate once and didn't enjoy it, and I do Judo occasionally when I can to supplement competition work. Although I appreciate the effort and skill that goes into every art.... for me though none of them beat Ju-Jitsu!!

I was about 18 and the class (Jikishin) was run by then Sensei, now 10thDan Professor, Terry Parker. The class was really packed and I learned the break falls and was also taught a front strangle defence and a wrist lock. I then thought "this stuff is pretty good". Unfortunately due to my football and athletic commitments I didn't properly start until many years later.

In truth when I returned in 2010 I had one aim and that was to get my long awaited black belt. After being encouraged by Sensei Ian Arbon, I felt it was very achievable with a lot of hard work and support from both my Sensei and club mates.

Every belt is difficult if you don't put the time and effort into it and it only gets easier with practice and commitment, hence muscle memory takes over. Certainly the final few months were difficult, not to mention the dreaded Pre-test! I put a lot of time into the black belt training with my training buddy Doug McDonald and despite both picking up a few injuries at the final hurdle we got through it. It was mentally and physically tough, but so worth all the blood, sweat and many hours training!!!

It certainly means 'Respect' to everyone that has achieved it because it is difficult to attain. Personally it means a huge amount because not only have I achieved a long time goal but it has also opened other doors to coach others which is also very rewarding. I wear it with a real sense of pride and achievement even though it's only the beginning of your ju-jitsu learning.

Yes in unusual circumstances! Shortly after passing my green belt I got jumped from behind in the street one night and in automatic mode I threw my attacker over my shoulder with a fierce shoulder throw. It was only then when I witnessed my attacker in agony on the pavement in front of me, I realised it was a mate of mine messing about. He never tried it again and I realised how effective this ju-jitsu was!!

Everyone will tell you I am extremely competitive so yes at every opportunity! So much so that in my eagerness and stupidity to win medals in the 2013 Danish Open, a week before my Dan Grading, I ended up with a double hamstring tear in Random attacks semi-final!! Somehow strapped with ice packs, I won a medal hobbling through a weapons kata later in the competition and also completed my black belt a week later ... just about!! I have a few medals now in both Random Attacks and Weapons Kata and hope for a few more yet!

Positive in so many ways. I love the art, the sport, the club and have so many good friends through it! Post retiring from football, it has also given me an opportunity to be part of a winning and successful team again, remain competitive in sport and continue to be challenged and learn new things. The only negative is being the only (but passionate) Tottenham supporter in a very heavily Arsenal supporting dominated Wakarashin club! I get plenty of stick, including from Sensei Ian Arbon, although I give as good as I get and it's all good banter!!!

For different people it means different things including; gaining self confidence, gaining fitness, achieving goals, making friends, learning self defence and exploring the opportunity to be competitive. It ticks so many boxes!!!

Each individual is different but like anything, what you put it you get out! I train in the dojo at least 2-3 times a week and also attend squad, whilst also coaching on a Thursday and Saturday. When not in the dojo, I am working on different aspects in the gym to supplement my jujitsu or prepare for competitions. When not in the dojo or gym, I am at doing kata's, weapons or routines with my daughters! The ideal training place is the dojo, but every day you can do something, even if it's revising a previous syllabus at home or on holiday!!

We are very fortunate to have so many top competitors, coaches and Senior Sensei's at the club who are willing to pass on what they have previously learned! Everyone is really friendly so take every bit of advice you can, train as often as you can, work hard, and most of all enjoy yourself and you'll get the most out of it!!